Pan, Lord of the Wilderness visited me with a message for humankind. This occurred while writing my first book, The Golden Ones, which became When We Were Gods. He told me that the Nature Kingdom requests our help. However, the type of help he requested surprised me.

You might be wondering: If the Nature Kingdom requests our help, what can we do? Plant trees? Clean pollution? Well, to my surprise, Pan said:

“Natural forces want to work with us but have been disappointed so many times. If nothing else, grow something just to see how difficult it is to grow, because then you can honor it even more. Fail. It doesn’t matter. Just try.”

What? Did I see, “Fail?” And, that it doesn’t matter as long as we simply try? Nonetheless,  those are the words I heard. In addition, Pan also said:

Carol Chapman with her giant sunflowers in August 2013. Photo by Daily Press photographer

You never know what’s going to happen when, as much as possible, you show an attempt to work with nature. In the photo on the left, giant sunflowers grew in my garden. A local newspaper photographer took the photo using my camera. He used the photo he took with his camera to illustrate an article in the Daily Press about my garden.

Interestingly, I did not plant these seeds. I don’t know where they came from! They just turned up in my garden – volunteers, as they’re sometimes called. Fortunately, I recognized them as sunflower seedlings and didn’t weed them out. In addition, I hadn’t planted sunflower seeds in this garden, so they weren’t seeds that germinated from previous sunflowers I had grown. 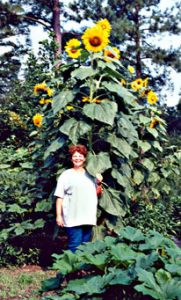 Giant sunflowers grew in my garden the year after my Encounter with Pan.

However, I had planted sunflower seeds in another garden (photo on right), years before, which I photographed and included in When We Were Gods. These had grown into the first giants in my garden.

I believe the important word from the quote above is: “attempt.” As I understand it, the Nature Kingdom feels encouraged to clean the earth if we, at least, try to work with it. I assume this means that when we attempt to work with nature, we create more good than when we ignore the Nature Kingdom. Furthermore, I suspect that plants enjoy it when we fuss over them.

In addition, I believe the Nature Kingdom thrives when we appreciate it. As Pan said, in the first quote above, “grow something just to see how difficult it is to grow, because then you can honor it even more.” Therefore, by attempting to work with the Nature Kingdom, we can’t help but appreciate the strength, beauty, and dogged determination to survive of plants.

Lately, I no longer grow large vegetable gardens as I used to. I no longer freeze and can prodigious amounts of vegetables. However, I still continue a relationship with the Nature Kingdom. For example, I fuss over daffodils and day lilies. I also grow indoor houseplants, such as Christmas cactus, aloe vera, and spider plants. Sometimes, I fail with them, but I keep trying.

What are your experiences with the Nature Kingdom? Do you keep a vegetable or flower garden? Do you fuss over houseplants? Have you had an encounter with Pan? Please share below in the comments section. Thanks.

If you’re interested in learning more about my encounter with Pan, you’ll find a description of my experience (I felt terrified at first) and Pan’s message in When We Were Gods. It’s in the chapter entitled, “Message from Pan.”

dear carol, the first email i got from you concerned geese, maybe about their return. i have been very concerned about a goose with a broken wing who could not fly and was stuck here in connecticut. but he has survived it seems. several of us have been trying to feed him. it has been an interesting journey with him.
anyway i was wondering how i got on your email list. is your email list too big for you to know how one individual person got into it?
i have been telling the story of my little goose (quite adult actually) to many people, maybe one of them gave my address to you??

Dear Nina, Thanks for sharing your heartfelt story about the goose with the broken wing. I can imagine the concern and care you and your friends have shown the injured goose. You must feel a sense of relief that s/he has survived. I once rescued a sick baby squirrel and raised her/him to adulthood, so I’ve had a little bit of experience taking care of a wild animal. It wasn’t very easy. And, as soon as s/he could, s/he was gone.

You asked about how you got on my list. In answer, just about everyone I send my broadcasts to signed my guest book and gave me their email address when I spoke in person in their area. Some people have also given me their information by subscribing to my list from this website. I don’t add people to my list unless they personally give me their name and email address. As a result, I would not have taken it from your friends.

In looking at my records, it seems as if you probably attended my event called: Your Soul’s Destiny: From Atlantis to a New World in 2003 in Connecticut or Massachusetts. Was it really that long ago? To me, it’s like yesterday. No wonder you can’t remember.

If, for whatever reason, you don’t want to receive my emails anymore, there’s always an “unsubscribe” link at the bottom of the emails I send. Just click on it, which will take you to a page where you can unsubscribe. Then, the software should take you off the list. If not, “reply” to the email I sent you and I’ll take care of it myself.

Nonetheless, I’m glad you wrote and shared your story about caring for the goose. It’s a loving story many people can relate to. I’ve actually been sending emails for a while, so I don’t know why the first email you received was about the Canada geese flying north. I guess it has something to do with the software I’m using, which is a total mystery to me. In any case, I’m glad you’ve received a few emails recently. You can find all of the previous emails I’ve sent as blog posts right here on this website.