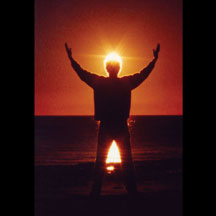 Video: Taking the cover photo of When We Were Gods: Only one chance and an unexpected difficulty arises?

What do you do when you have only one chance and an unexpected difficulty arises? In this video, I’m going to tell you about an unexpected difficulty that occurred while taking the cover photo of When We Were Gods. I’ve received so many compliments for this cover photo that I thought you might like to know what it took to take the photo. (By the way, just in case you can’t see the video, or it stops partway – it happened to me, my computer is over 5 years old – the transcript is below. Or, you can go directly to YouTube to watch the video there. Here’s the link:  http://youtu.be/PSgvKF-528c.)

Transcript: For my model, I asked my son, Adam Balsley.   At the time, he was in college and home for the weekend. Unfortunately, that meant we had only one morning to take this photo.

We woke up at dark and headed out before first light. When we got to the beach, the sky was a gorgeous red color. Adam started dancing around to keep warm.

Just as the sun cracked through the horizon, he turned to face the sunrise, raised his arms in the “God is Greater” pose, and I snapped the first photo.

Unfortunately, the picture I had in my mind was supposed to have the sun way down at his feet to illustrate how the light of our soul fills us with spirit.

It wasn’t ‘til I got to the beach that I discovered that to get a photo like that, he probably should have been standing on a hill. Of course, there wasn’t a hill in sight, and the sun was steadily rising.

What to do? Well, the only thing you can do in a situation like that is to just let go and let your intuition take over. And that’s what I did.

Once the sun rose over Adam’s head, the photo op was over.

By the way, if you are thinking of taking a photo like this, it is really dangerous to look directly at the sun and can cause blindness. Once Adam’s head was no longer blocking the sun, I was finished, I was out of there. And Adam, who was facing the sun, had his eyes closed the whole time.

I am immensely grateful to Adam for making this marvelous photo possible. To me it says so much about who we really are as souls in the earth.

If you want to find out more about me and When We Were Gods, just go to my website at CarolChapmanLive.com.

This is Carole Chapman, author of When We Were Gods.